Creating bonds and networks that stretch across “Mare Nostrum”

A young participant in the Mediterranean Citizens Assembly relates his experience

This year’s meeting of the Mediterranean Citizens Assembly Foundation, (Barcelona, Spain, November 7-10, 2019) focused on the ‘Mediterranean Youth’. Here is the testimony of a young Greek participant:

« Through this meeting I had the opportunity to listen to people from all over the Mediterranean. I cannot stress enough how enlightening this process was! » 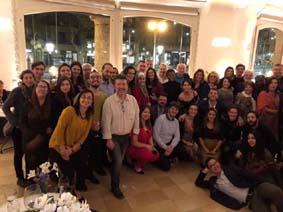 My name is Odysseas Xenos. I am Greek, University student, studying Chemical Engineering. This was the first time I participated in a ‘Mediterranean Citizens Assembly’ meeting and I must say I was really very much impressed. The organizers did a tremendous job of bringing people together and providing them with a platform from which to speak. The exchange of ideas and the sharing of information not otherwise accessible is what made this meeting extremely worthwhile.

We were split into four “Agoras”, meaning discussion groups, each one discussing a different subject: New technologies and Democracy, Culture And Education, Economy, Mobility And Climate Change, Empowerment And Citizenship.

The purpose of each “Agora” was for the participants to initially hear the rapporteurs talking about subjects that were of personal interest or concern to them. Then the group would discuss these subjects and each participant could express his opinion, propose solutions etc. The rapporteurs were not predetermined. Any of the participants could take on the role. Ideally, the group would eventually come to some conclusions at the end of the two days, which would then be presented in plenary. The coordinators and translators did a great job, making the process run smoothly.

Through this meeting I had the opportunity of listening to people from all over the Mediterranean. I cannot stress enough how enlightening this process was! Reading the news and been personally informed about the various problems each country faces is one thing. Having a person besides you who can talk to you through his personal experience, living within these problems, is another matter altogether.

Noticing similarities between theirs and our problems and challenges is something that, at first, surprised me. The handling of the public debt in Lebanon, the rise of Nationalist agendas in France and elsewhere, the privatization of public goods, etc, etc. We have heard about inspiring experiences and projects led by young people, as for instance, the fight against misinformation and fake news in Algeria, and many others.

What mattered to me were not the final conclusions that every “Agora” produced, but the process of getting to them. The process of meeting new people and creating bonds and networks that stretch across “mare nostrum” and even further.

I want to congratulate the organizers, the coordinators, the translators and all the other people that worked for this meeting and made it happen. It was an amazing experience from which I personally think I have gained something substantially important. The process of opening up my mind to new realities and feeling that we form a community. It really felt like we were not from x county or y state but we were all citizens of the Mediterranean, with common fears, worries and problems. And that is what I believe this meeting has achieved.