“Towards a jus commune that can be universalised?” * 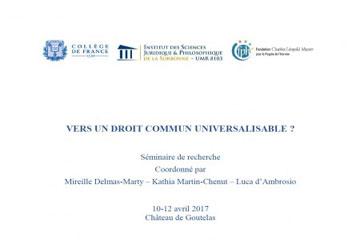 Following an exploratory seminar in May 2016, a workshop was held at the cultural centre of Goutelas-en-Forez on 10 April 2017. It brought together in particular specialists in the history of law and various branches of international law to discuss the two primary goals of the research: understand the past and describe the present by studying contemporary practices and identifying fragments of common law in five fields (international criminal justice, trade and investment law, climate justice, social justice and the protection of human rights). The seminar was an opportunity to open avenues for further research, in particular on the conditions for common law to be ‘universalised’ and invoked against political powers (states), but also economic actors (companies). A follow-up study day took place on 27 November 2017 in order to compare the first research results with the critical views of law theorists.

Report in its original version in French.

* For the choice of the title, see the terminological memo written by Mireille Delmas-Marty and He Linxin (Appendix No. 1 - in French)