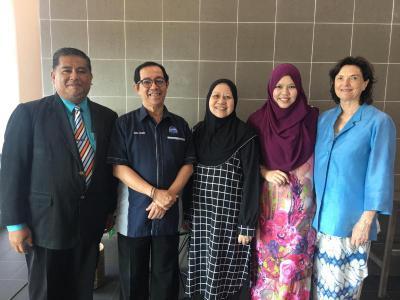 Malaysia hosts and friends, with Prof Dulkifli Razak, former President of International Association of Universities, and host for Malaysia event, second from left. Betsan to right.

Judge Durie, is an advocate for an approach of responsibility in law. His Memorial Lecture was on ‘Indigenous Law and Responsible Governance of Water’, 26 September 2017, preceded by a Seminar on Indigenous Studies hosted by the Mizan Institute at the University of Malaya. Donna Durie, also a lawyer, spoke about the position of indigenous women and the sanctions of traditional communities which can have a powerful role for in preventing domestic violence. This derives from individual duty, or responsibility, that is vested in all members to maintain respect, harmony, and balance in the community.

Betsan spoke about law for earth’s global commons in New Zealand and then global context, and explored public trusteeship and environment as a legal person. New Zealand made the Whanganui River a legal person, and other countries have followed suit – India (Ganges), Ecuador, Colombia. People in the seminar had not thought of the river as a living person, or a living whole which flows from the mountains to the sea.

Judge Durie’s presentation followed the line that Malaysia and New Zealand both have British law incorporated into their legal systems, with Malaysia also having Malay , Indian and Chinese legal traditions as part of a more plural society (‘Indigenous rights from the New Zealand Perspective’).

Durie emphasised the difference between the British legal world view that man is master of the world, and Māori tradition of people as an integral part of the ecosystems of forests, wetlands, rivers, lakes and streams. The issue that Maori have with the ‘British’ system is that all these aspects of nature have been significantly destroyed or degraded under this legal regime. With regards to freshwater, the government position the ‘no-one owns water’ has in practice meant that water allocations have excluded Maori from access to commercial use of water, and that Māori communities have been denied access to their traditional water sources.

Respect is a key expression of the spirituality that connects Maori to their tribal members from the past and future, and to the natural world. Respect drives practices for safeguarding rivers and wetlands, birds and forests, and the use of natural resources is determined by what is for the good of all. Durie argues for the restoration of the authority of Māori/indigenous peoples over their waters, or natural resources so that these practices can be restored. He makes an interesting case for the ownership of water – that Maori ownership is not that same as the private good interest of the European law, but that ownership isncorporates elements of private interest as well as public good. Ownership entails public responsibility. Another difference in law that Durie mentions – while the English set bootom lines for standards such as water standards, Maori set top lines!